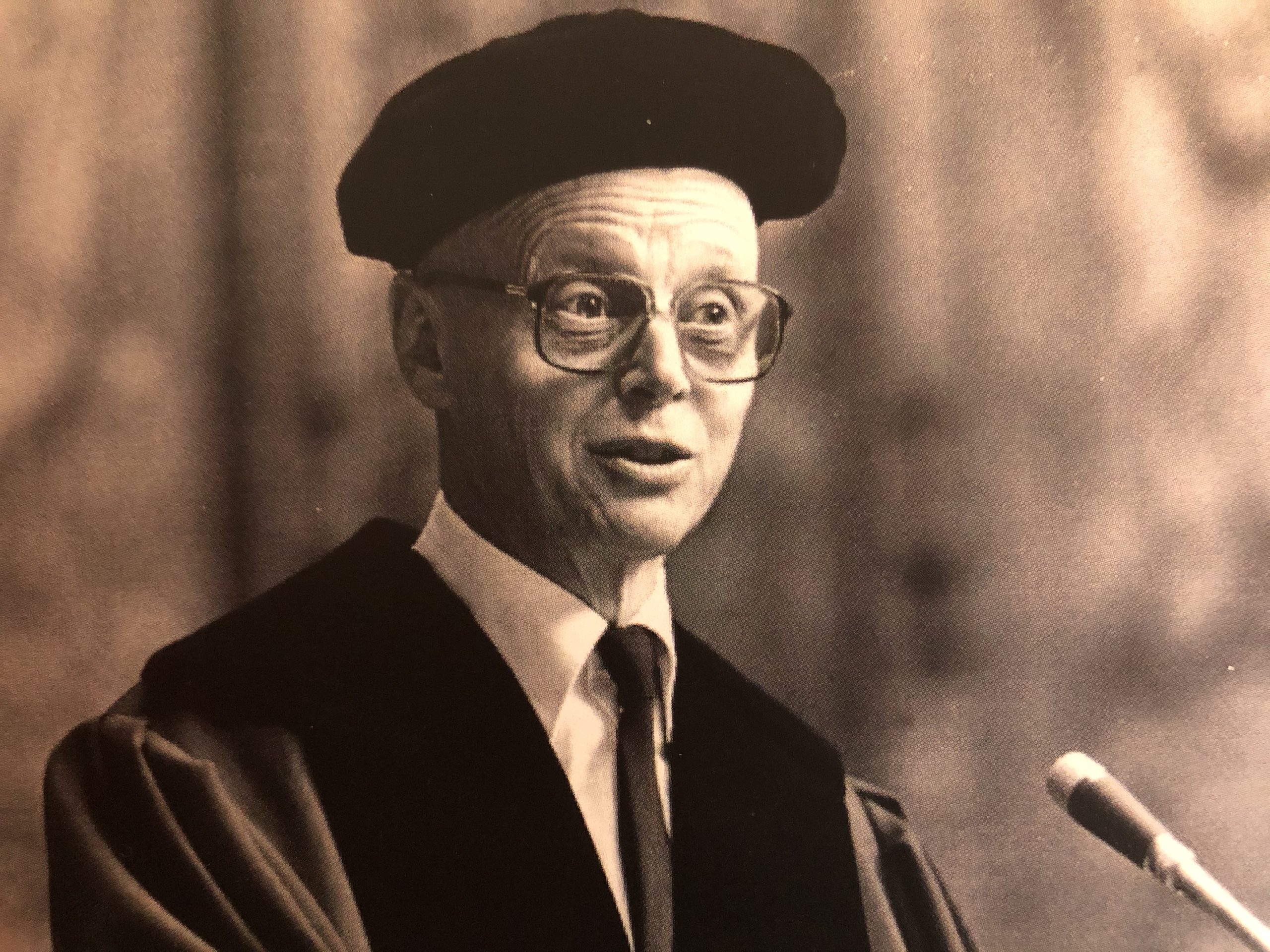 Geert Hofstede is a pioneer in the field of culture. His main scientific contribution is in the field of cross cultural psychology which begins as a serious discipline after the publication of his book, Culture’s Consequences, International Differences in Work-Related Values (Sage, 1980). In it he introduces four “dimensions of culture”, in what evolved into the now internationally acclaimed 6D model of national culture.

He is a man who follows his heart and his intuition, making his career path anything but run of the mill. Starting his career as a mechanical engineer, Geert grows to become the most widely quoted social scientist of the Netherlands.

The Wall Street Journal named him one of the 20 most influential business thinkers of the 20th century. Eleven universities have bestowed an honorary doctorate on him. Her majesty the queen of the Netherlands knighted him into the Order of the Lion of the Netherlands.

Geert is destined to go to Delft University of Technology. But Geert is a high school graduate at the age of 16, and too young for student life. His father therefore enrols him in the local technical college.

It gives him the opportunity to master the practical skills of the profession: technical drawing, carpentry, metal works. He enjoys the work and would later state that “not having the right tools” is a major frustration”.

Highlight of his studies is an internship as a ship’s mechanic, 5th class, working below deck in the engine room of the SS Johan de Witt. The voyage takes him to the Dutch East Indies, now called Indonesia.

A year before graduating, at the age of 18, he transfers to Delft University of Technology (TU Delft) in order to avoid the draft. 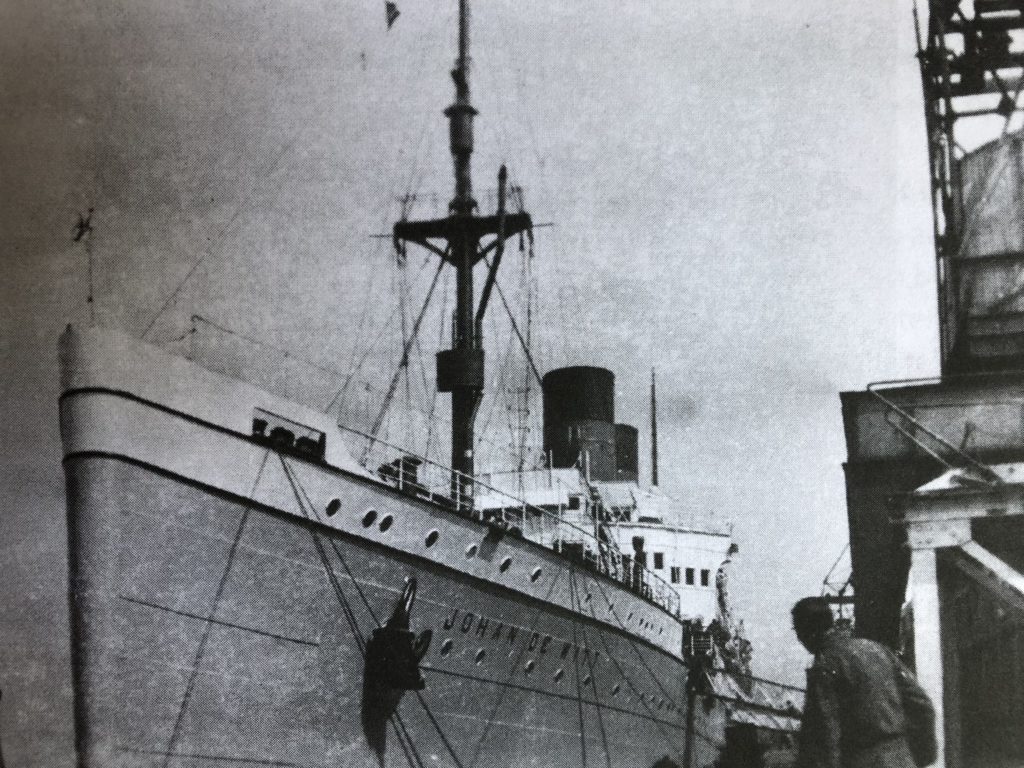 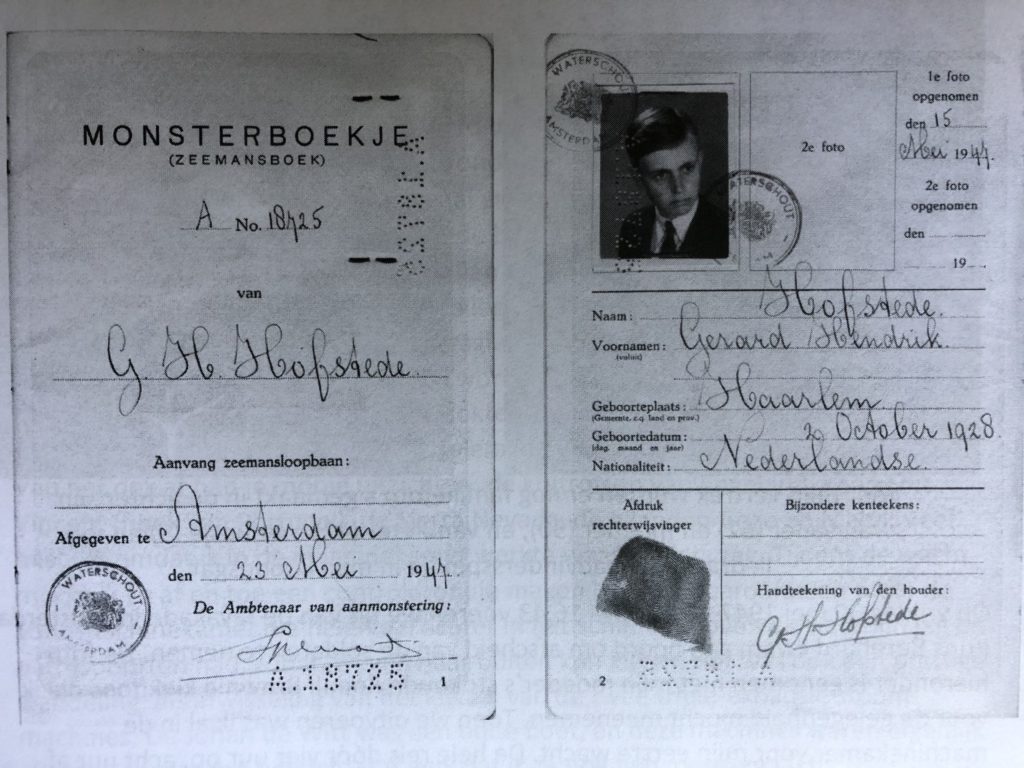 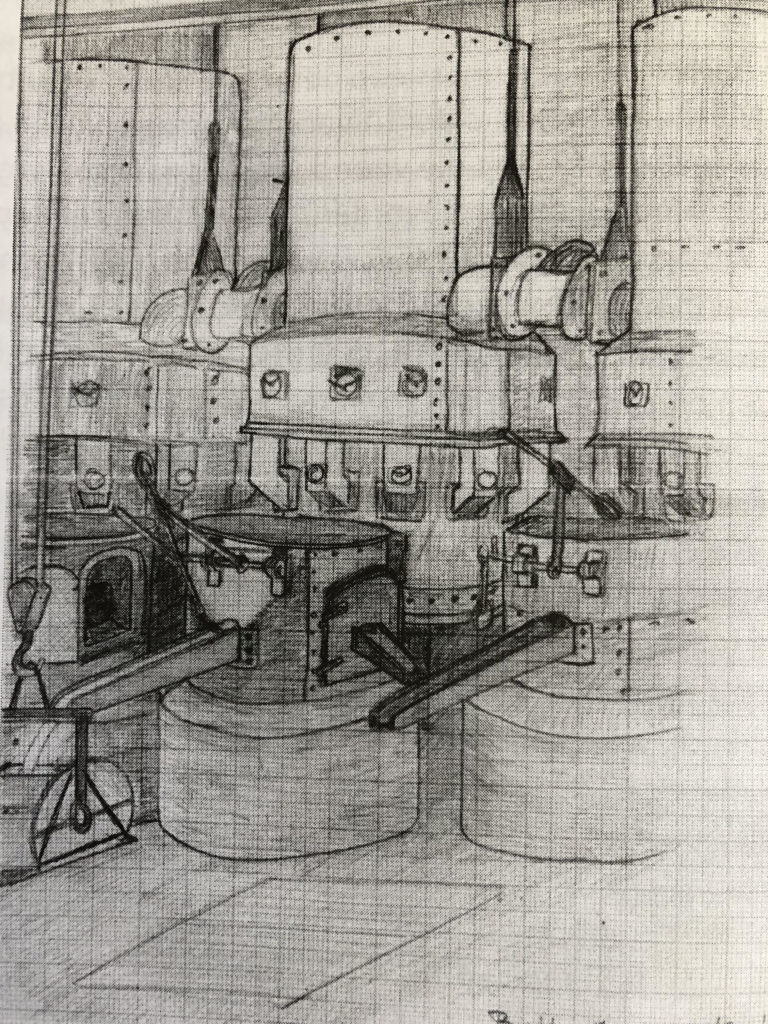 Listen to Geert speak about his experience as an intern on the SS Johan de Witt, steaming to Indonesia.

Though he had a technical degree, he discovered his real interest was in “internal productivity” as opposed to “external productivity”, a theory he was introduced to by reading the A.M. Kuylaars’ dissertation, Work and Life of the Industrial Worker as an Object of Socially Responsible Company Policy.

Geert would later say: My conversion from engineer to psychologist started the moment I read that book. 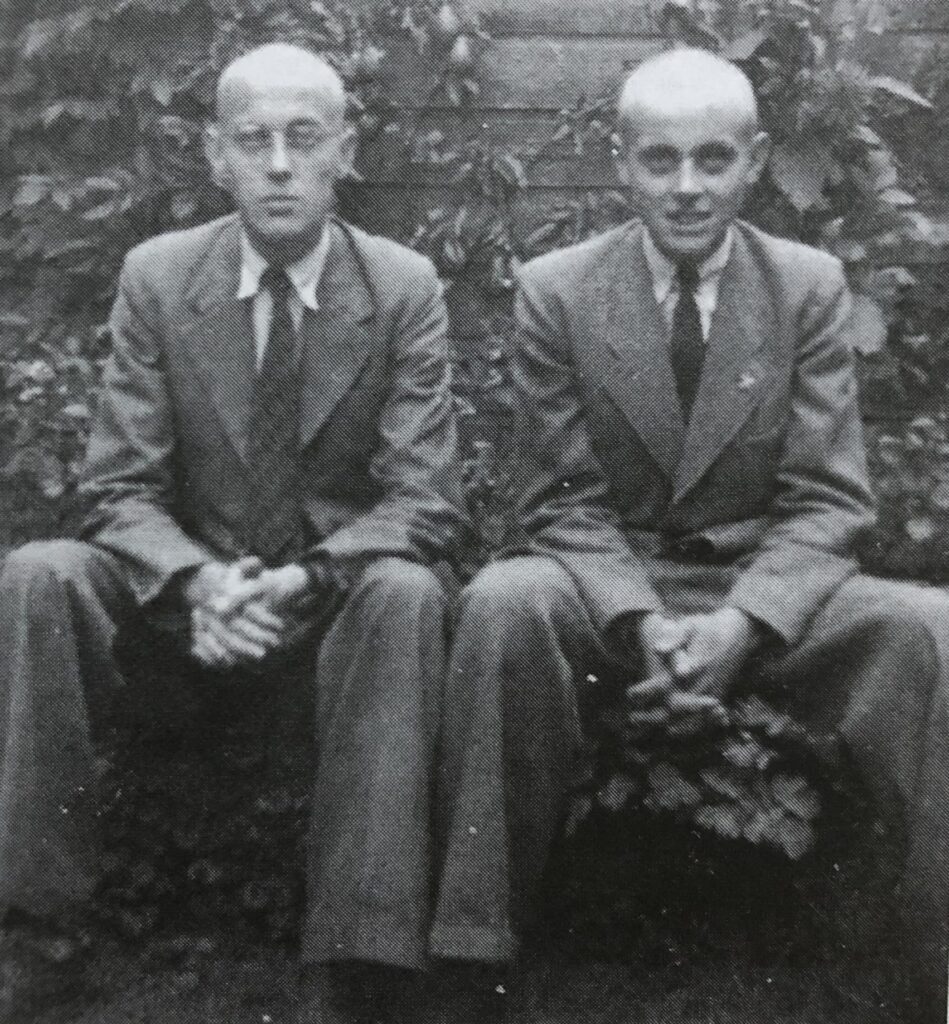 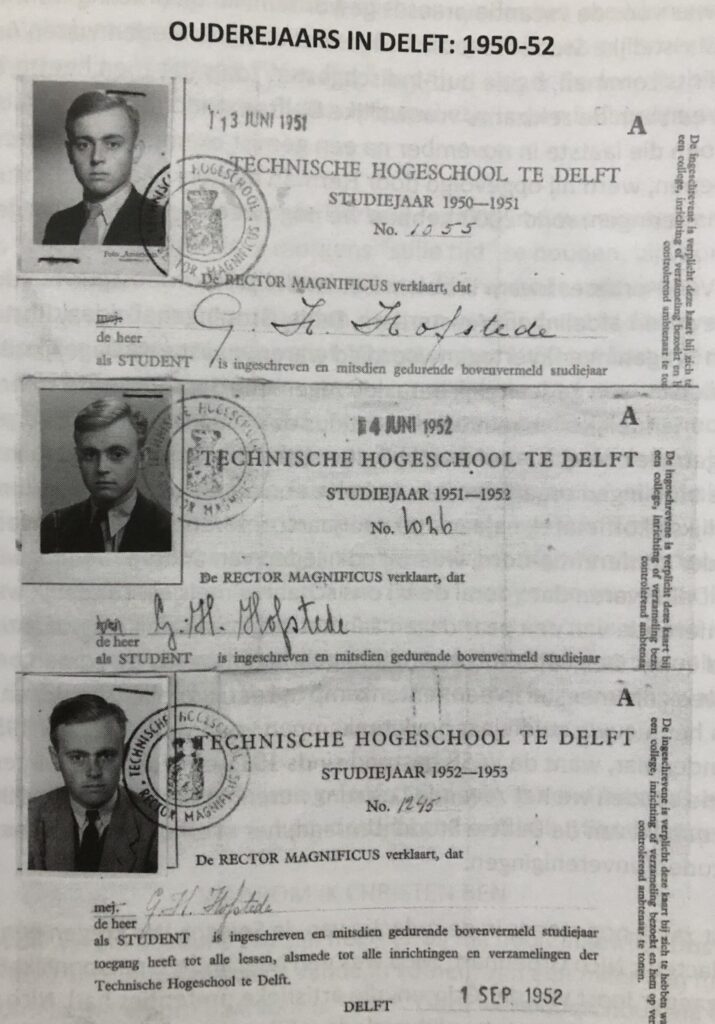 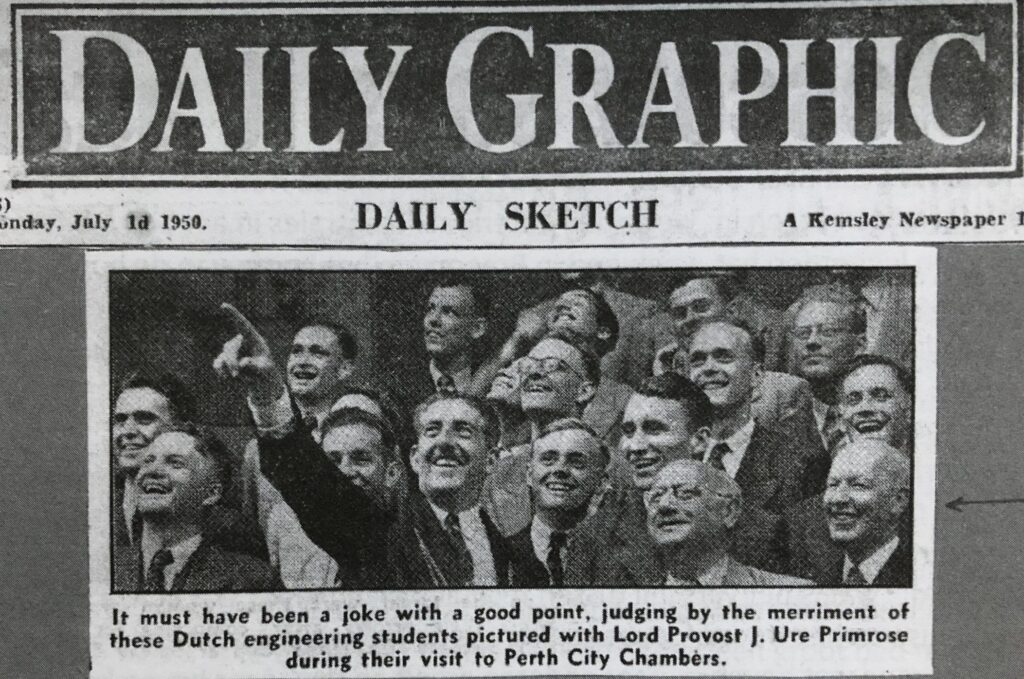 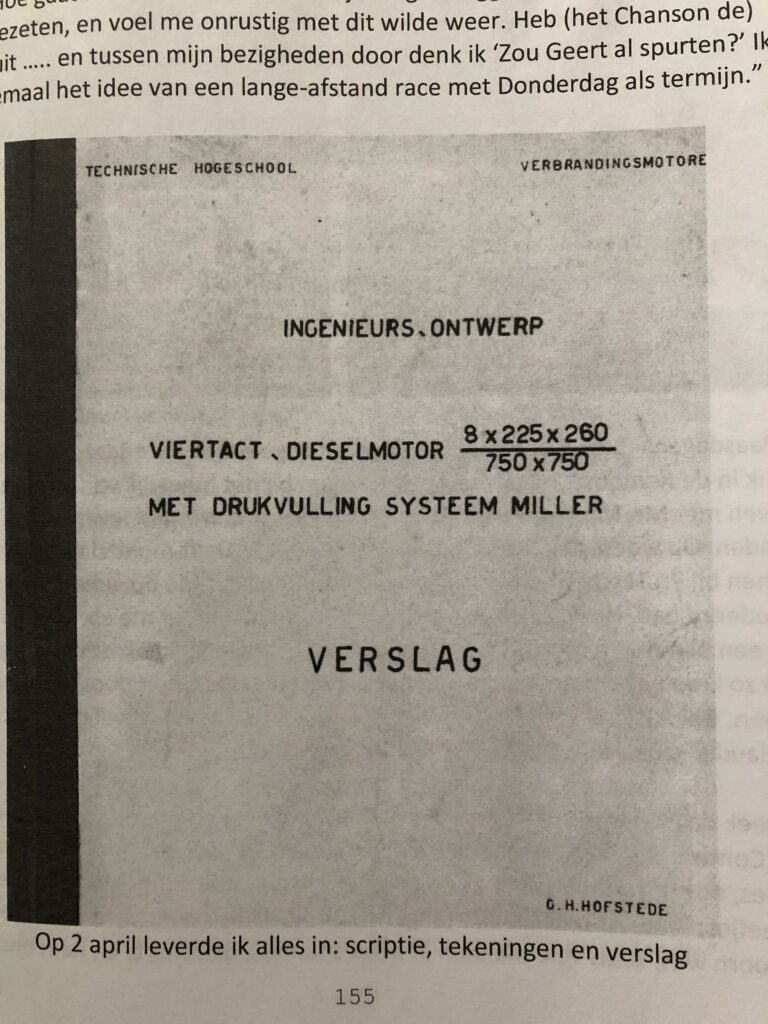 Listen to Geert describe the impact reading Kuylaar's book had on him.

In his work as a personnel chef of the spinnery, Geert was confirmed in his notion of the importance of people for the prosperity of the company.

Geert decided to do say goodbye to being an engineer, and do a PhD study about the role of managers.

He found funds and a promotor, and set to work interviewing managers at various companies.

Listen to Geert explain how his personal experience led him to choose the topic for his PhD.

Geert studied the budgeting systems of six manufacturing plants in the Netherlands, one of them was IBM.

Geert first worked with open questions, then developed a forced choice questionnaire based on them. The experience with these interviews would serve him well later, when he rolled out the personnel research at IBM. His conclusion was that there was a just level of control.

After graduating from Delft University in 1953, Geert was drafted into the army as an engineer. He describes his new living quarters as:   “an old carcass” with 32 beds for soldier engineers.

He struggles with the fact that he in the army and considers becoming a conscientious objector, but decides against it after discussing this with friends. He writes to Maaike: (his friend) De Koning tells me that it might be a good idea to be drafted because then I can see from the inside how rotton the war machine is. This will give me strength to dedicate my life to positive things that go against war.

Just before the end of his military service, his jeep is involved in an accident while he was driving, leaving him with a dent in his head. 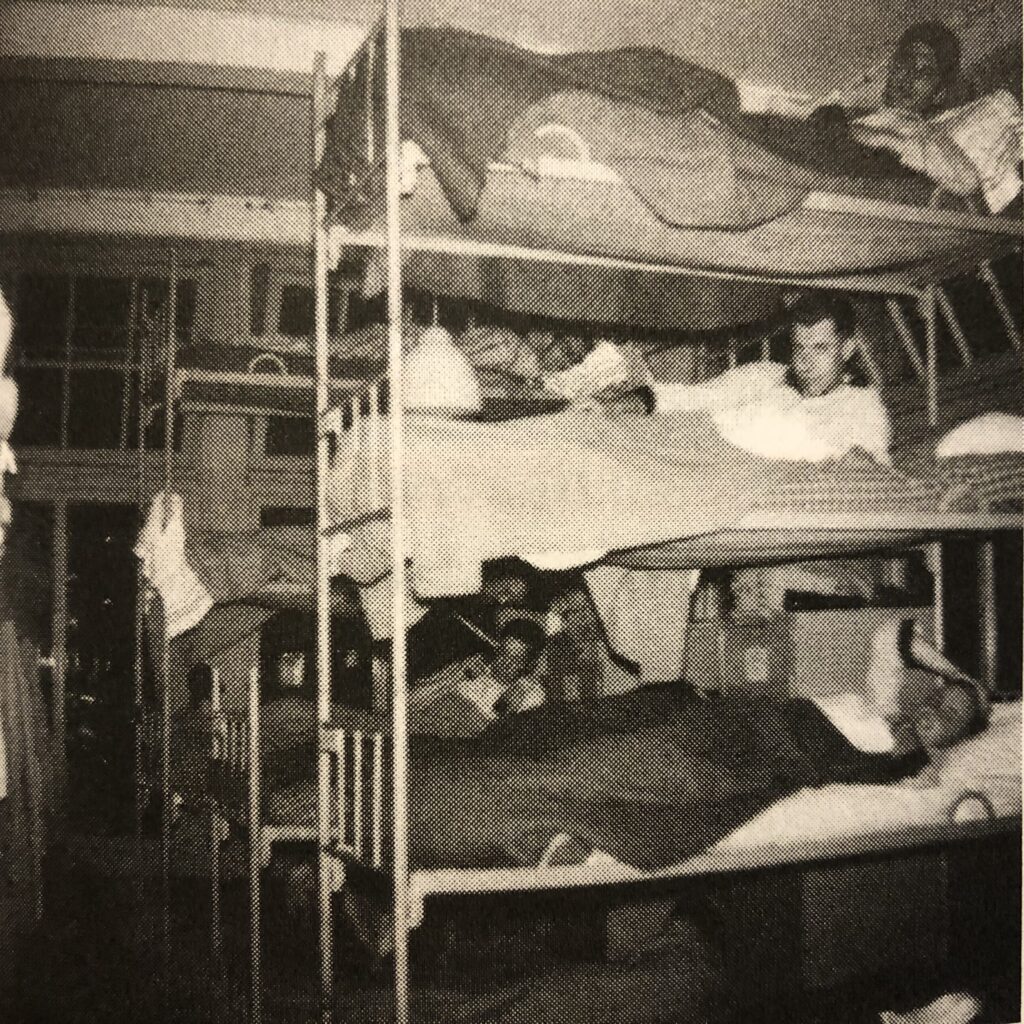 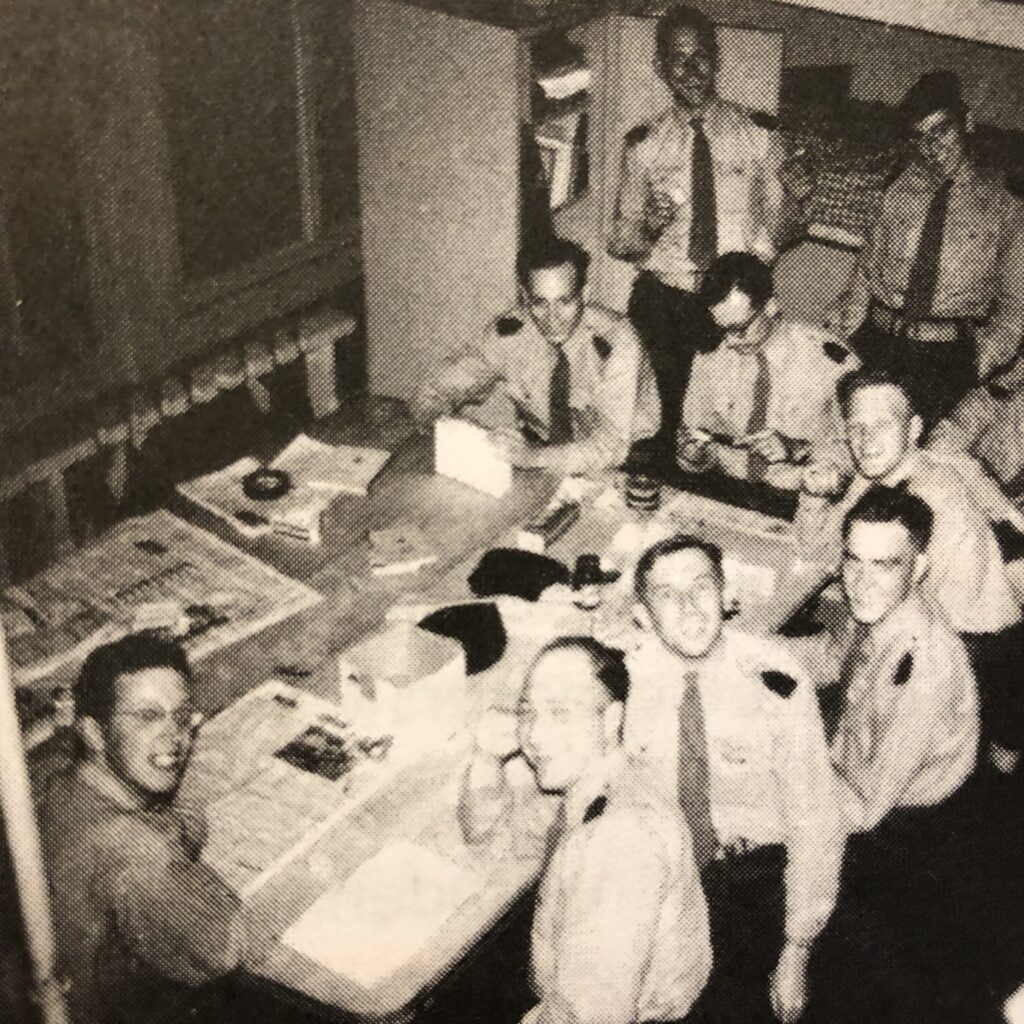 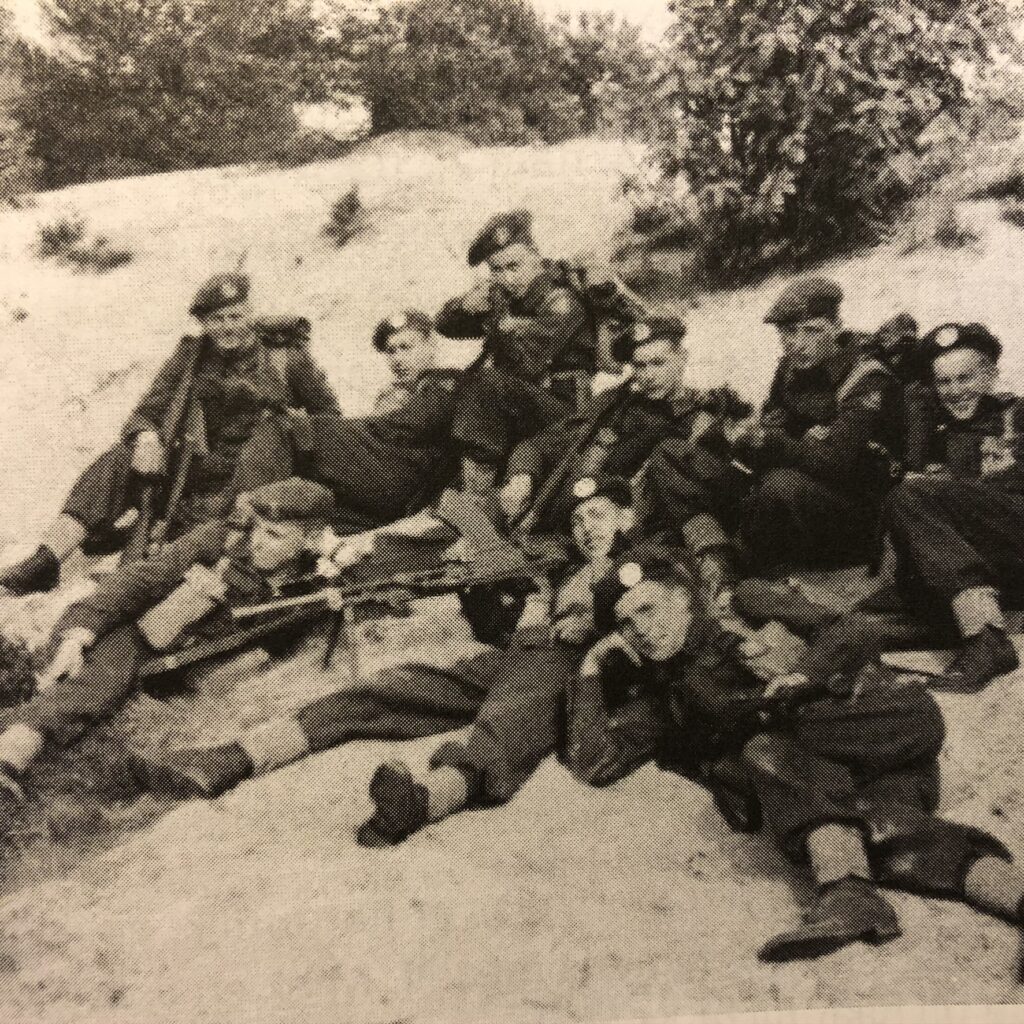 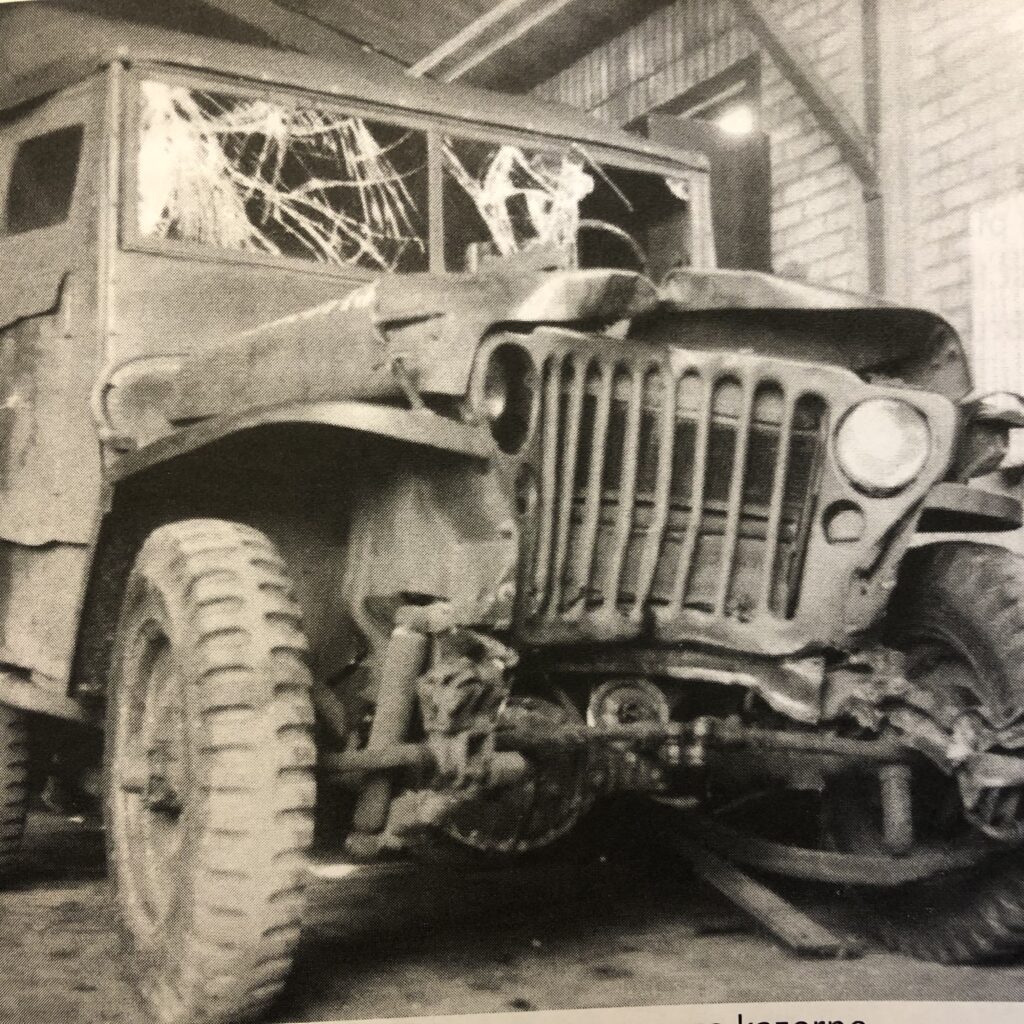 Listen to Geert about why he choose not to be a conscientious objector.

After fulfilling his military service and before starting his job as an engineer, Geert wanted to experience life as a factory worker, incognito.

For four months, from March to July 1955, Geert worked incognito as a semi-skilled  fitter for a printing press company in Amsterdam and one month as an unskilled labourer in a tobacco factory.

Listen to Geert describe his experience as an incognito unskilled labourer.

Geert embarked on his first jobs as a manager in three Dutch industrial companies, the first one was Stork in Hengelo, where his family came from.

With Stork, he negotiated taking  a course in management as “assistent to the director” by Berenschot, before starting his job. He finished the course in 1956, after which the family moved to Drienerwold in Hengelo for him to start his job.

He was 27 years old. He was starting a family and was earning 500 guilders a month.

In 1959, he started a job at De Jong en Van Dam, Jovanda, a company making ladies stockings. He tells about his experiences in the film. When he returned home from a vacation to Paris, a letter from the management was waiting which asked him to “extend his holidays”.

He then got a job at a textile factory in Enschede, N.J. Denk N.V. He was particularly pleased with that job, because Fred Polak, a professor in “futurology” was on the board of directors.  Before accepting the job, he had spoken to Polak about doing a PhD in social sciences, an ambition that Polak supported. 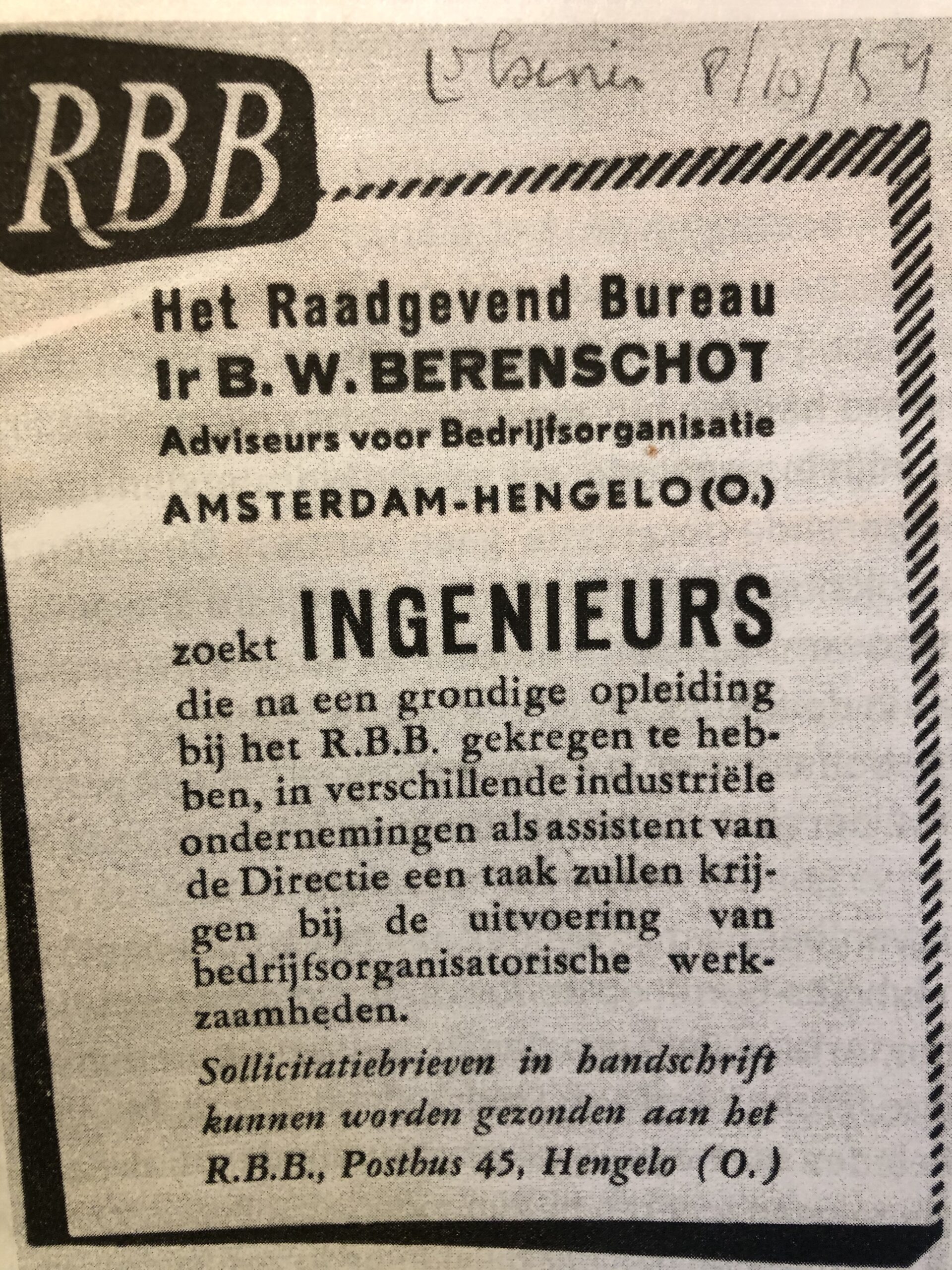 Listen to Geert describe his experience as beginning manager at a company for ladies stockings.

IBM had been one of the organizations that Geert interviewed for The Game of Budget Control. IBM offered him three jobs, only one was an international position. He did not hesitate in choosing the job in personnel research at IBM’s international headquarters.

He was one of the architects of IBM’s big opinion surveys among their personnel of all ranks, in over 60 countries. Geert travelled widely in that period. It was a relaxed time politically, with easy access to countries that are now in turmoil.

His data books would reveal his treasure. For his work on budgeting, he received the Yearly Efficiency prize 1968. 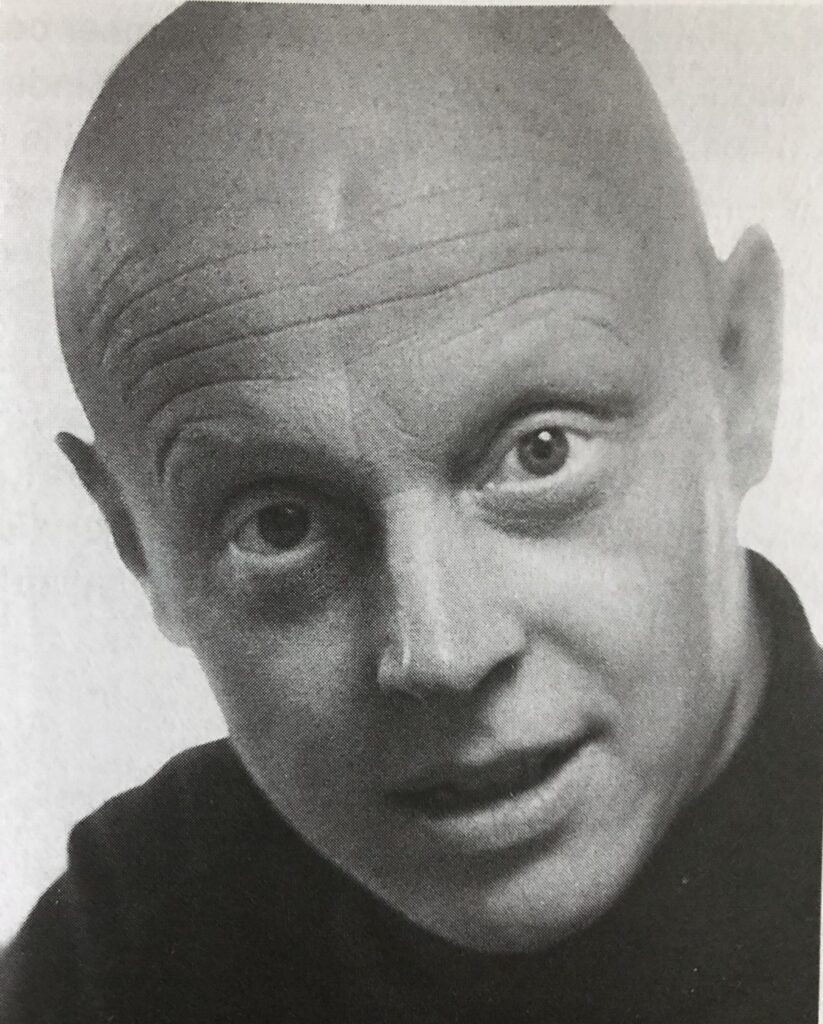 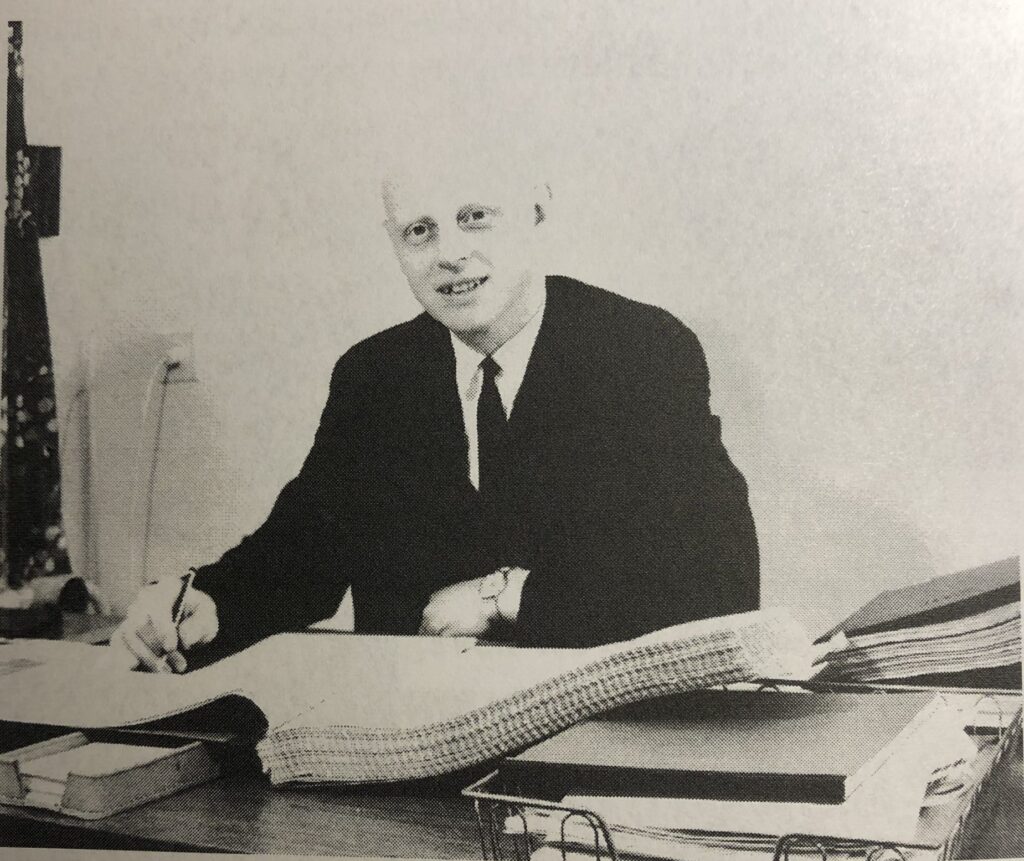 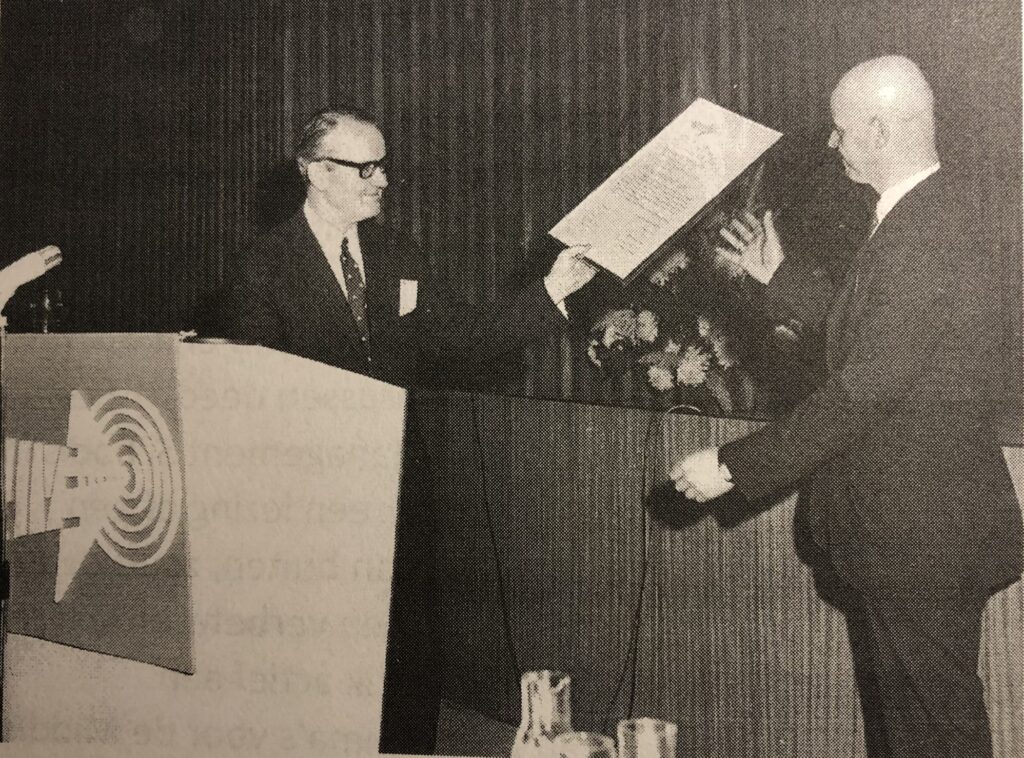 For the sabbatical, Geert moved to Lausanne, the Swiss city happily situated on the Lac Léman. He would teach at IMEDE (now IMD), a business school.

His family moved with him. Maaike had no trouble adapting, being a teacher of French. As a side effect of the move, the four boys soon mastered the language – a fact that proved crucial to their later lives.

At IMEDE, Geert administered his IBM questionnaire to the international student population, and found the same dimensons of culture as he had at IBM. This told him that he was really on to something.

He asked to be given more time on the data, but IBM told him this was something for academics. That is how Geert decided to go to academia. 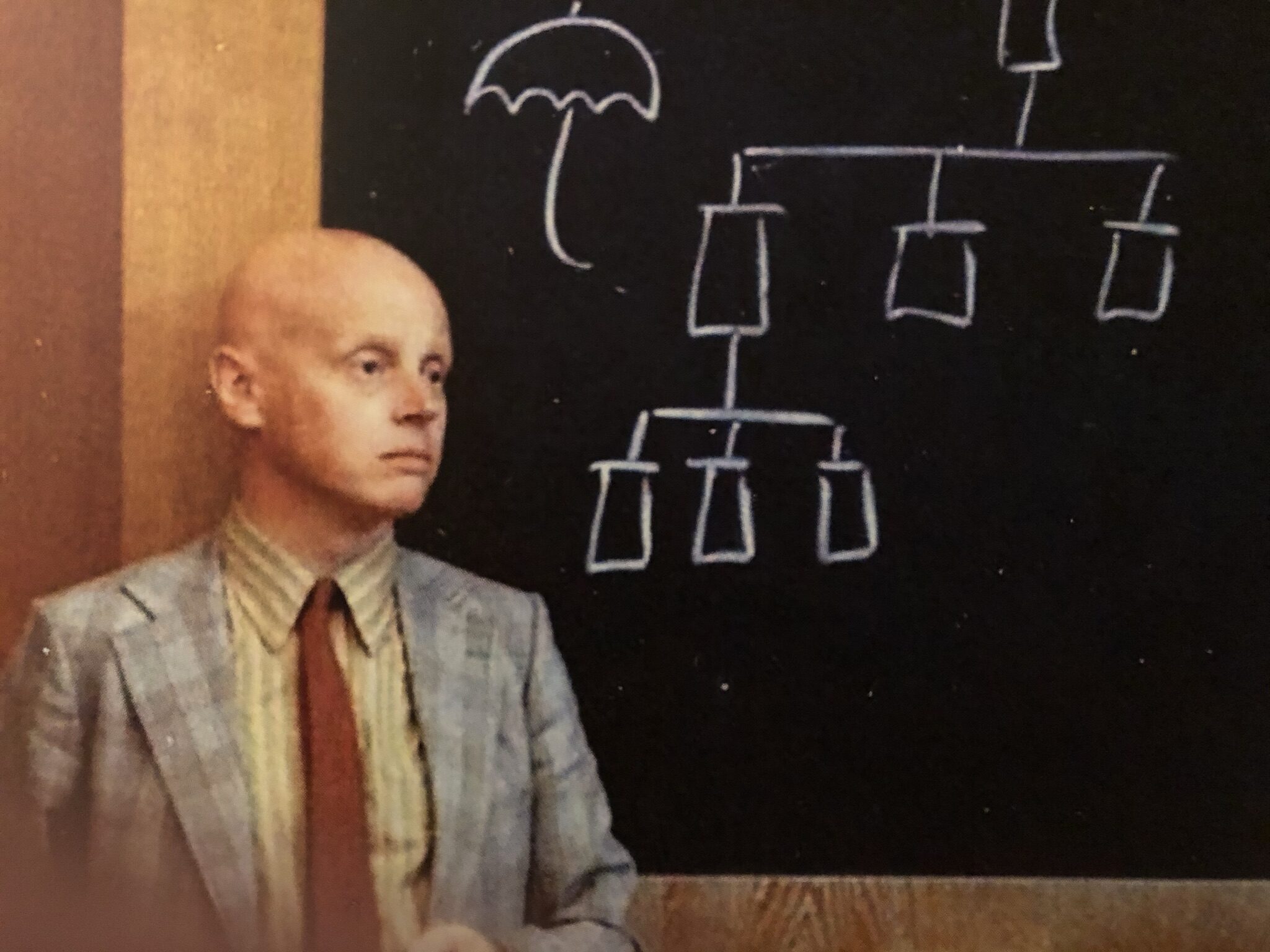 At IMEDE he could develop his budding ideas about cultural dimensions.

In order to be able to work on his IBM data, Geert took a job at EIASM, the “European Institute for Advanced Studies in Management” in Brussels, that had recently been founded.

It is in Brussels that Geert did most of the work on his IBM data, while also teaching at INSEAD at Fontainebleau, France.

He read widely and solidified his “dimensons of culture”, for which he had formed the ideas during his time in Lausanne.

Listen to Geert explain why he went to Brussels to write Culture’s Consequences.

In 1980 Geert co-founded the Institute for Research on Intercultural Cooperation IRIC with Bob Waisfisz. He became its first director. IRIC’s focus was  on value differences as part of national cultures, and on the implications of these differences for management and public policy.

IRIC was affiliated with the University of Tilburg.

IRIC was a prime example of scientific entrepreneurship.. Listen to Geert speak of IRIC.

In 1985 Geert was inaugurated as Professor of Organisational Anthropology and International Management,  a title he coined himself.  He immediately proprosed a degree in international management. Geert’s vision was to prepare young people for international career with at least 2 languages in the curriculum: English and French or German. He was convinced that the mastery of  languages was crucial to the international professional succes of the students.

The programme was not welcomed with open arms by a number of the staff. And Geert suggest this is because “many staff members could barely speak these languages themselves(…) They were threatened by it.”

But students were very interested in the programme and it was passed by the Faculty Council thanks to the efforts of Professor Hein Schreuder and the support of the Council’s student members. 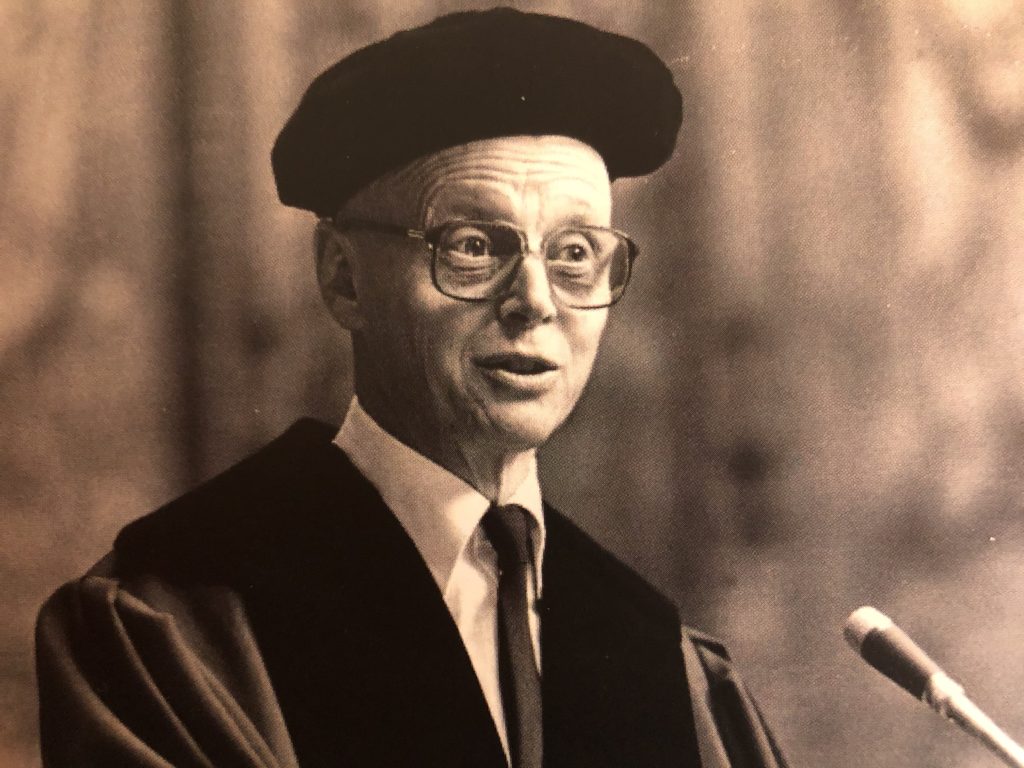 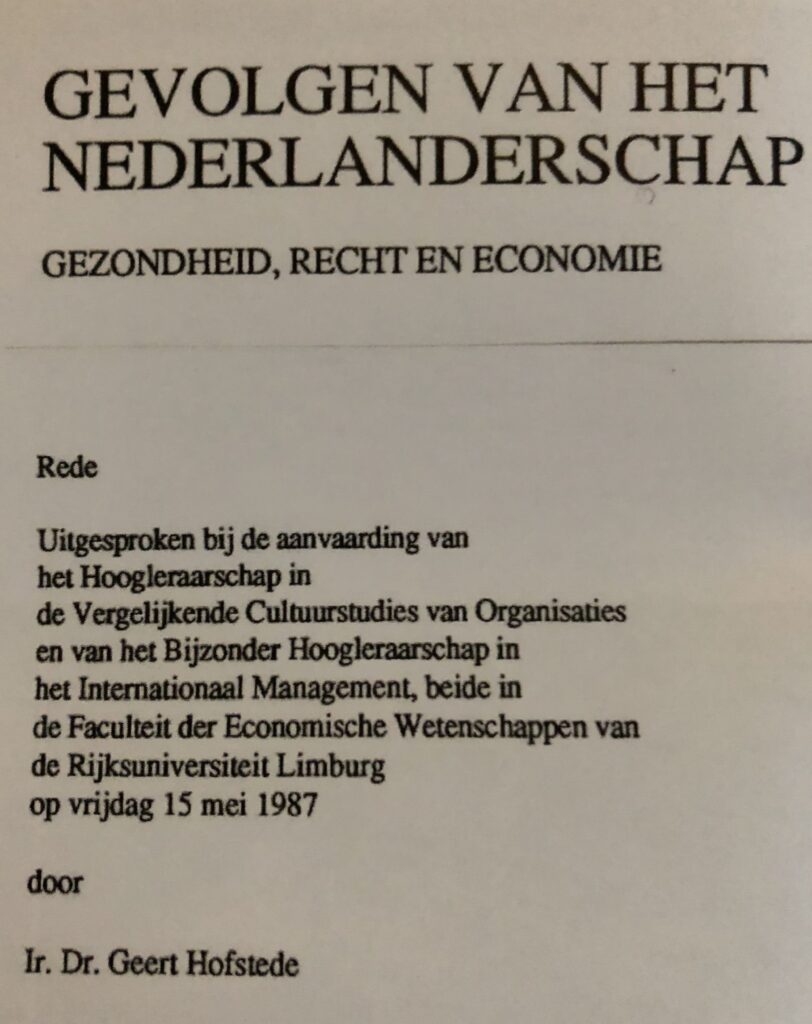 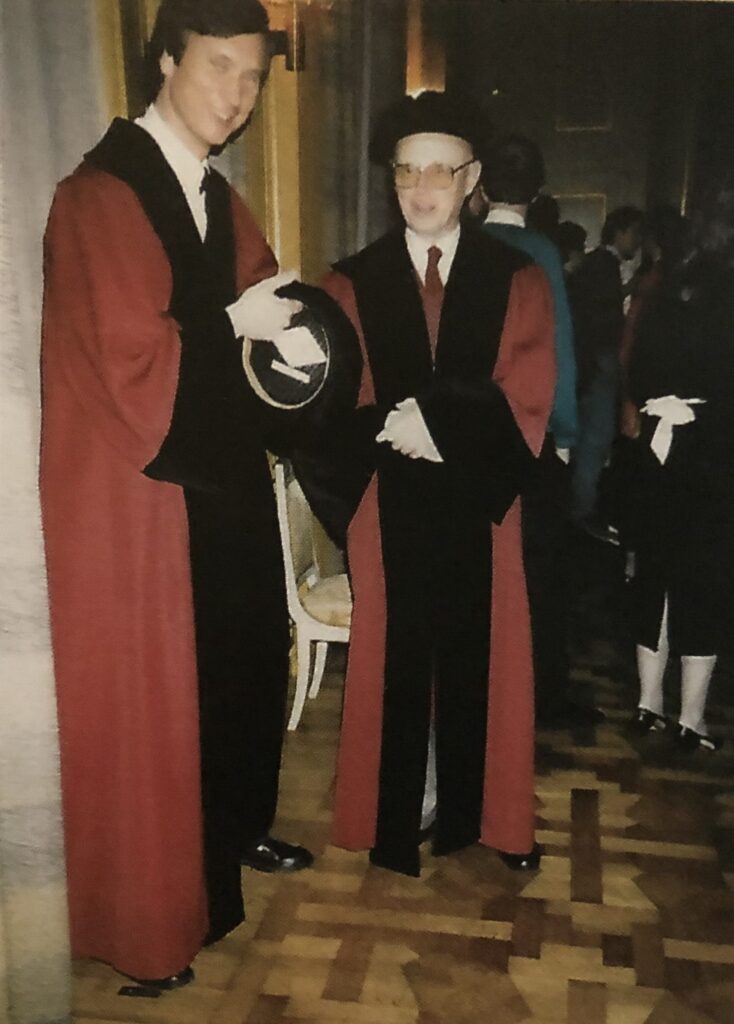 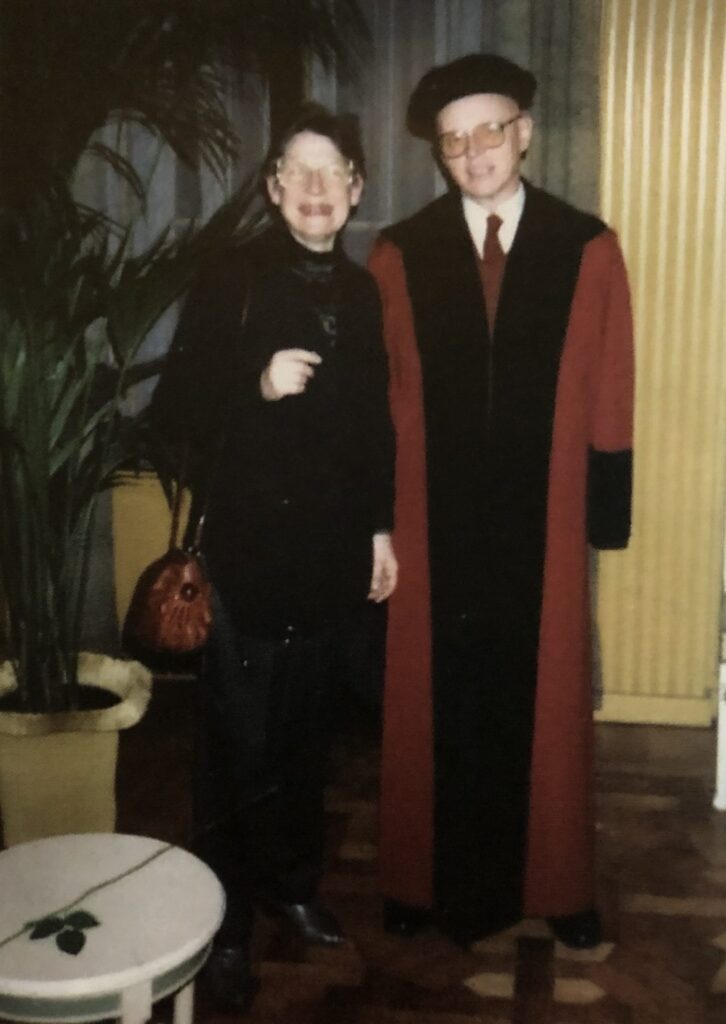 In 1993 Geert turned 65, and became emeritus. He delivered his valedictory address on the topic of Images of Europe:past, present and future.

There were major differences between Geert’s inaugural address and his parting address. The former was in Dutch for a Dutch audience; the latter in English for an international audience.  This fundamental shift in focus was predominately due to the Maastricht Treaty (1992)  founding the European Union.

Unfortunately, the International Management programme, dear to Geert’s heart, had been abandoned by the faculty during Geert’s sabbatical in Hong Kong and Hawaii. After Geert’s address, Franz Palm, made a public apology on behalf of the Faculty Board.

A Geert Hofstede Chair in Cultural Diversity was established, with Professor dr. Mark Peterson as chair.

Immediately after leaving Maastricht University, Geert and Maaike went to Hong Kong. They had spent  5 months in Hong Kong during his sabbatical, Geert en Maaike returned to spend a longer time, Geert as an Honorary Professor.

2011: September 2011   Knighted by order of Her Majesty Beatrix, Queen of the Netherlands, to the rank of “Ridder in de Orde van de Nederlandse Leeuw”

“Dutch people tend to underestimate the importance and international impact of my work. Our feminine culture is more readily prone to jealousy rather than recognition. I sincerely hope that we will find a stable home to carry on this work.” 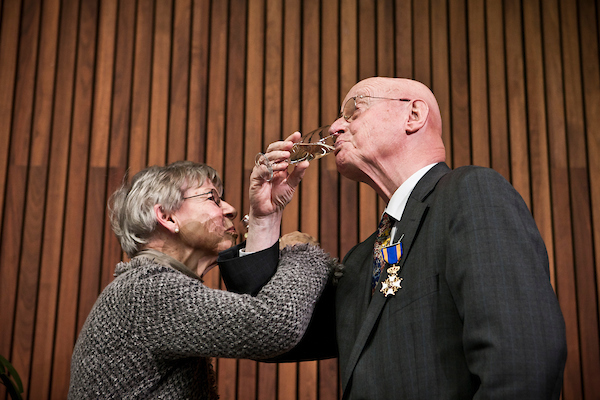 See the official ceremony in which Geert Hofstede was knighted.

Listen to Geert’s reflecting on his awards and distinctions.